With the government toying with the idea of banning disposable barbecues, and supermarkets across the country starting to withdraw them from their shelves, we take a look at the eco-friendly alternatives to this staple of a British summer.

We Brits certainly love a summer barbecue! It’s estimated that between us, we send over 1 million disposable barbecues to landfill every single year because they can’t be recycled or composted. And whilst the average barbecue will burn for around 90 minutes, it can take the metal they’re made from approximately 200 years to fully break down once they’re thrown away.

But it’s not just the waste generated that make disposable barbecues harmful to the environment. Not everybody uses these barbecues responsibly, and if placed directly on the ground, they can cause severe damage to the ground beneath it, and even cause the fire to spread. It’s estimated that 4% of accidental wildfires in Britain are caused by disposable barbecues.

Thankfully for the barbecue loving Brit, there are sustainable alternatives out there. 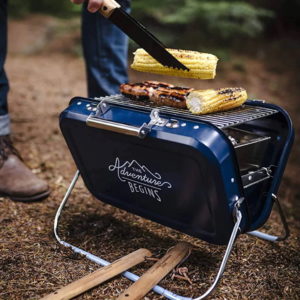 Lightweight, easy to carry and with enough space to cater for four, the Gentlemen’s Hardware Portable BBQ provides the authentic barbecue experience wherever you are.

The compact folding design and carry handle means that it folds away into the size and shape of a briefcase, making it so easy to take out with you.

The high sides of the heavy duty charcoal burner help to stop charcoal from falling out of the BBQ, making it safe to use and protecting the ground beneath.

The Gentlemen’s Hardware BBQ has a stainless steel design, making it robust, rust free and easy to clean. It has a large 32.5cm x 23cm cooking area, giving ample space to cook burgers, sausages and kebabs for up to four hungry people! 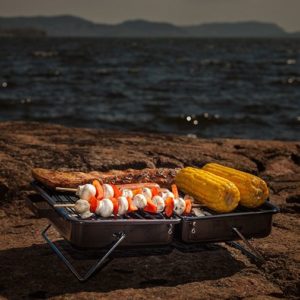 If you’re looking for something a little more compact, look no further than the EcoBBQ Folding BBQ. It folds down to just 24cm x 17cm and weighs only 1.25kg, leaving plenty of room in your rucksack for other essentials.

The BBQ can be set up in seconds by simply folding out the legs and placing it on the included heat resistant mat, which protects the ground beneath. When unfolded, the BBQ has a generous 32cm x 23cm cooking area, making it suitable to cook for up to four people.

When you’re finished with the EcoBBQ, it comes complete with a handy carry bag to take it home in. 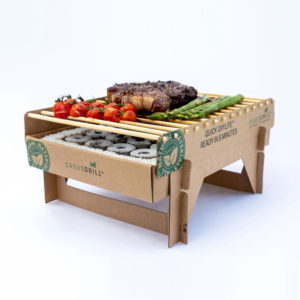 If reusable BBQs aren’t really your thing, you’ll love the all new CasusGrill Eco Disposable BBQ. It provides all of the convenience of a disposable BBQ, without the environmental impacts!

The CasusGrill is made from 100% natural and sustainable materials. The BBQ uses bamboo charcoal briquettes, which sit in a bed of lava stones, insulating the grill and amplifying the heat.

Talking of heat, this beauty really belts it out, reaching searing temperatures that last up to an hour – just like a conventional disposable BBQ!

The grill measures an ample 32cm x 24cm, giving plenty of room to cook for up to four people. What’s more, because of the insulating lava stones, the bottom of the BBQ remains cool, protecting the ground below.

There’s absolutely no metal or plastic in the CasusGrill, so when you’re finished, it can be placed in a bonfire, or even composted. The only trace left behind will be the lava stones, which are just that, stones! They can be returned to nature, or even used as soil conditioners for growing plants.

There we have it, three eco-friendly alternatives to conventional disposable BBQs. As always, if you’re enjoying a BBQ out and about, please BBQ responsibly and take your rubbish home.

These cookies are essential for our platforms to perform their basic functions. These include those required to allow registered users to authenticate and perform account related functions, as well as to save the contents of virtual “baskets” on our platforms.

Our platforms make use of different social media platforms such as Facebook and Twitter (through the use of sharing buttons), or embedded content from YouTube and Vimeo services to enhance the experience of website visitors. As a result, cookies may be set by these third parties, and used by them to track your online activity. We have no direct control over the information that is collected by these cookies.

Other uncategorized cookies are those that are being analyzed and have not been classified into a category as yet.